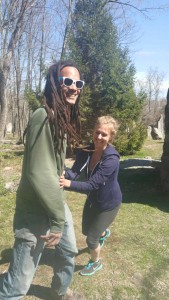 Luciano Menezes
Luciano was born and raised in Salvador, Brazil where he grew up on the beach. He learned to swim at a young age to help overcome asthma and became a natural water lover. As the story goes, Luciano got turned onto surfing in his teens where he learned how to overcome many of the fears that come with water and its forces.
When Luciano heard about the Bellyak Progression Clinic he said, “I was really excited about the idea because I missed having fun in the water, and Bellyak was the closest to surf I could find since moving to Asheville. My previous experience with surf definitely helped a lot, but I still had and will have to overcome fear. Nature is very powerful and I respect it a lot.”
Luciano was certainly a natural from day one in the way he worked with the water rather than trying to work against it, which most newbie paddlers tend to do. Once we found a helmet that would fit over his massive dreadlocks, we took Luciano from class II whitewater to successfully running the Ocoee in just 6 weeks time. And dare I say he “styled it.”
The most pivotal growth occurred on the Pigeon River Gorge in Tennessee, which Luciano took 5 laps on before moving on. Beginning by taking the easy lines down and progressing to catching every eddie and surfing the big wave at the bottom of Double Reactionary. He was ready to step it up and that he did.
Bellyak is excited to announce Luciano as one of our athletes of the month and equally as excited to follow him in his future Bellyak endeavors.
“I like the idea of continuing to learn and teaching other people what it’s like to have the same fun as I had. Bellyak is a new concept which I’m sure we will see more and more people join in and learning this new way of surfing the rivers.”
Luciano Menezes 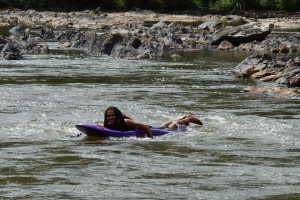 Jess Rustine
Jess Rustine is a light-hearted gal with a creative soul and now a graduate from Bellyak Progression Clinic! Jess only smiles when she is on the river and she proved that attitude is everything. She may have been the least likely candidate to become Bellyak’s V.I.P. of the month since her previous water experience only involved floating down a river on a raft with beer in one hand and sunscreen in the other. When others were fearful and timid, Jess looked only at the lines she wanted to run and pictured success in her mind with a big smile on her face. As most of us know it can be easy to focus on the places we do not want to be on the river and that is where we usually end up, but Jess never once focused on the negative.
“After attending eight classes I was on a class III+ whitewater river and crushing it! I say that not to brag, but to show how fast it is to get a feel for the Bellyak and how comfortable you can become on a river that intense so soon. I’d never imagined myself on a river such as the Ocoee after my first couple classes. This brings me to my third love of Bellyak (and most surprising to myself), the THRILL! I absolutely love hitting big water and get a kick out of flying over wave trains. It felt amazing to be so close to the water having to use my arms as a guide and body to steer, the Bellyak really helps you connect to the water.”
Jess Rustine
Jess is now in the frequent Bellyaker club and looks forward to continuing to refine her skills and learning more about whitewater. She plans to become an Instructor in the future so keep an eye out for her! 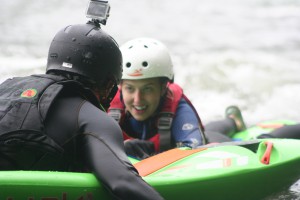