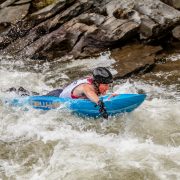 Moving across a body of water under your own power is a wonderful feeling. Combining the motion of swimming with the speed and glide of a boat/board is what prone paddling is all about. But why lay down and use your hands when you can sit, stand or kneel and use a paddle?  Read on.

END_OF_DOCUMENT_TOKEN_TO_BE_REPLACED 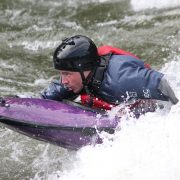 After 6 evolutions of prototyping and over 22 (because some were modified/repaired re-glassed) paddleable prototypes (the dumpster ones don’t count) it was time to go big boy on it. I didn’t have the skills, patience or time to turn a huge block of foam into a plug since a bellyak has compound curves. The skill of carving a surfboard is challenging, but to carve something that has compound curves and still maintain symetry is beyond my search engine. I enlisted Evan Solida, a brilliantly talented CAD designer who visited me at my shop and we got started by cutting up one of my Big EZ Bellyaks into 3″ cross sections, photographing them, and then digitally ‘stitching’ them together in CAD. Evan was instrumental refining my ideas into the models we have today.

Evolution 7: Getting Fancy: from Foam and Fiberglass to Rotomolded Polyethylene

My learning increased exponentially while designing this boat. The final version looked nothing like what we started with. My idea was for a general purpose river runner and something that would also be good on flatwater. (a ‘crossover bellyak). I made a rookie design mistake: I designed for what I ‘thought’ would work, and what I ‘thought’ people could paddle…not what I knew to work.

My first designs were a bit too hard to use for the average user and I wanted to make the experience of prone paddling more accessible. After we refined the CAD version as much as possible I ordered my first big chunk of urethane foam and had  the plug cut via CNC at Digital Designs in Winston Salem NC.  David Maughan (who worked at Perception and still works for Confluence) helped me prep the plug and we pulled a fiberglass mold off of it. The guys at Jackson Kayaks agreed to let me come in and run a few plastic prototypes on their oven, so that I would have a plastic prototype for testing. 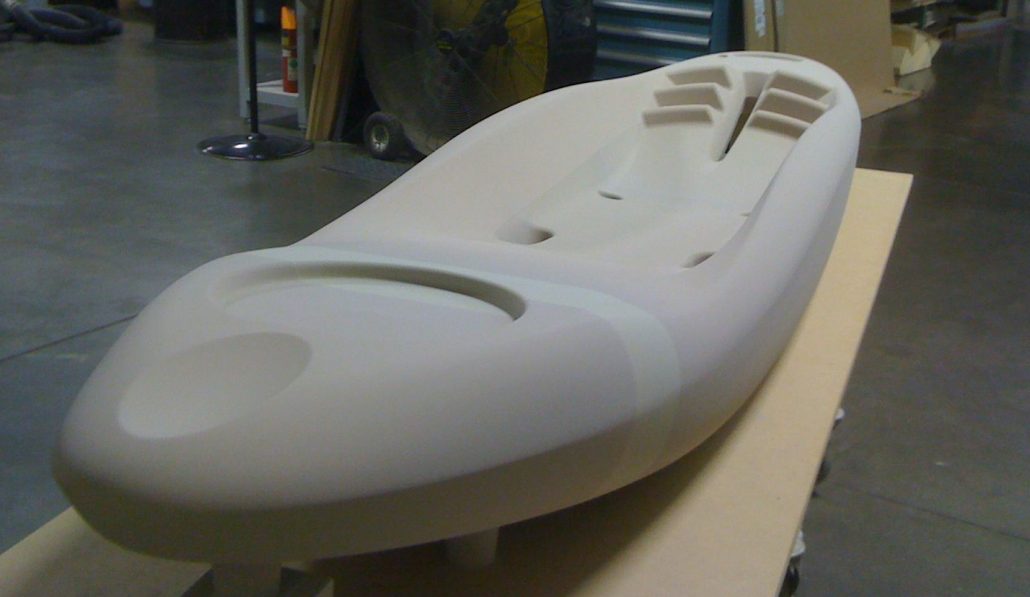 Sprayed and prepped for molding. 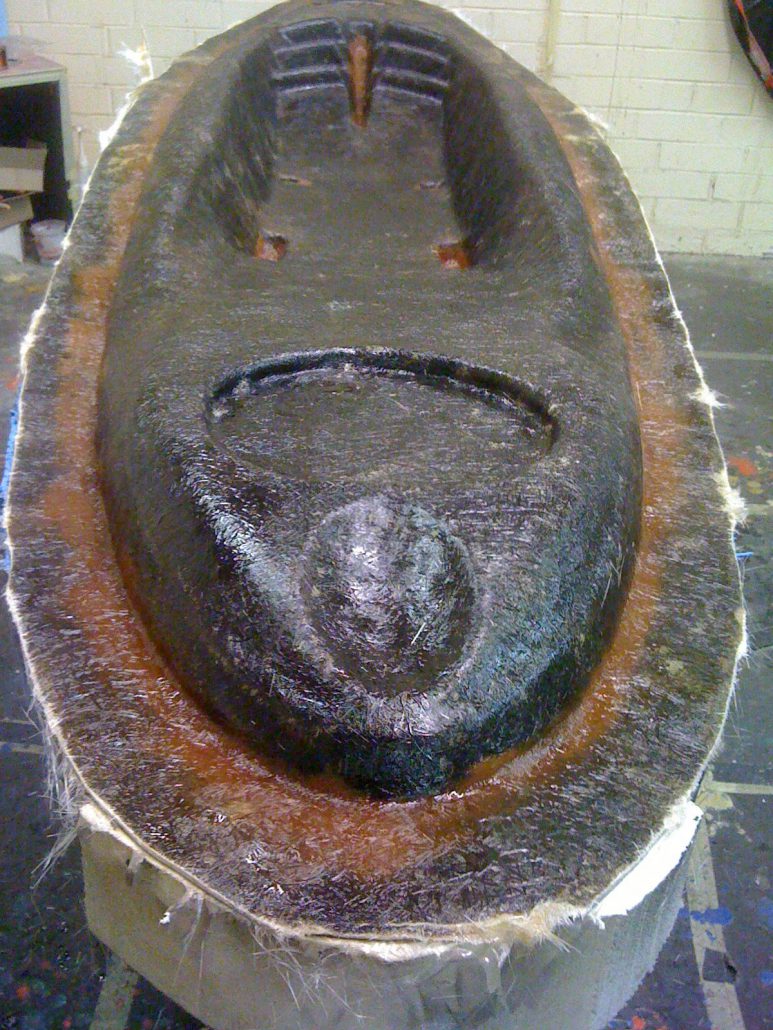 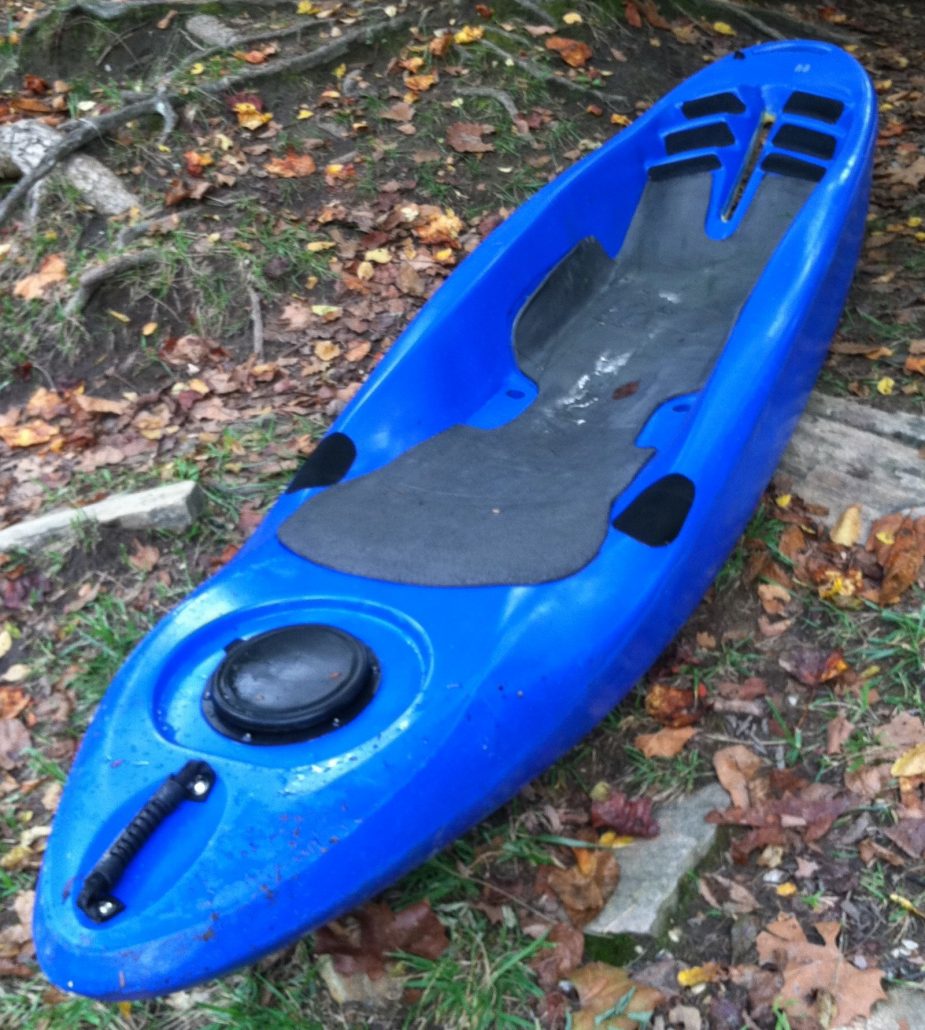 This first plastic bellyak, which I originally called the ‘Octane,’ was crap.  The sidewalls were too steep, it was edgy in a ‘suddenly upside down’ kind of way, without the upside of higher performance. The body cavity was also too deep and I hadn’t yet nailed the body to boat interface.

It was a great learning experience. I learned how to prep a plug, make a fiberglass mold, and then mold a plastic kayak from that. I honed my skills and tested my resolve with hours upon hours of sanding. I took what worked and kept moving forward.

I was pursuing the ultimate ride on whitewater and often times knowing what doesn’t work is the best clue to figure out what does.

To start this sport I knew I needed two models:

A boat that was fun on all water, a general purpose, all around Bellyak. Like the Perception Dancer…(a classic design that would define the sport for over a decade.) 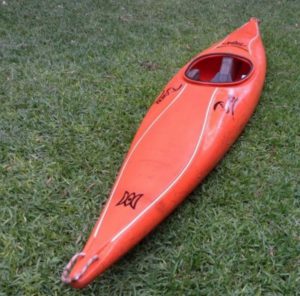 I also wanted to make a freestyle bellyak for surfing and playing every feature of the river, as the Big EZ prototypes were insanely fun for front surfing, and the planing hull made snapping into and out of eddies a feel like flying (what I imagine flying to be at least).

By now, I’d spent a few thousand hours building and testing, and I knew what needed to go into the production versions.

Frequency: the cruiser…based off the phat, the Sleek and the original Octane, with toe braces and hatch redesigned. 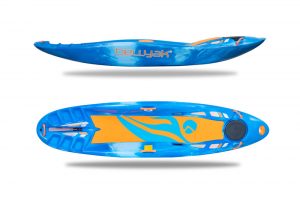 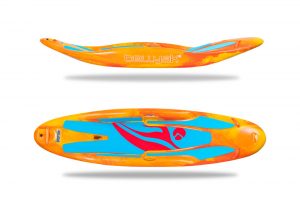 Play 45: I designed the Play 45 last, as we needed something that was sporty and fun like the Play 35, but with key changes to make it more forgiving and would accommodate a wider weight range. We designed this one off of the same hull as the Play 35 and added ten gallons of volume throughout the boat, increased the width by two inches, and made the body area wider and deeper. What we found was that the extra volume made the Play 45 very stable, and also accommodated a wide weight range. 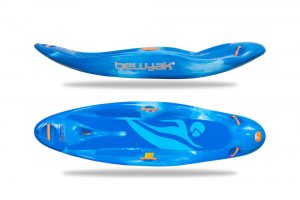 By asking questions, following the thrill of making the ride better, and not being afraid to make mistakes led to the creation of our current model lineup and birthed a new discipline into the paddling world! 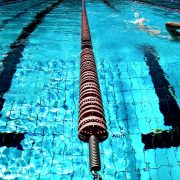 It’s true that one of the most popular off season workouts involves watching YouTube and drinking beer.  While this is one of the top training methods for marginal athletic performance, this approach results in startling feelings of being out of shape after a long cold winter. We suggest another route: intentional training for the activity at hand.

END_OF_DOCUMENT_TOKEN_TO_BE_REPLACED 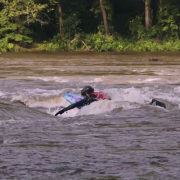 There is no better feeling than having your face inches from the water while watching the river rush by. Going fast while sitting still. Prone river surfing causes time to stop, and everyone remembers their first time better than prom night. For most, it’s the only anniversary that matters. Most impressions of surfing conjure up Gidget standing effortlessly sliding down a perfect TV wave with nothing but palm trees and coconuts for miles. Those of us lucky enough to not go to bed every night stuck to sandy sheets have to look for our own endless wave, the waves created by the timeless forces of rocks, water, and gravity.

END_OF_DOCUMENT_TOKEN_TO_BE_REPLACED 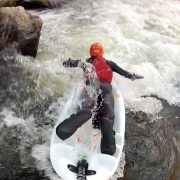 Standing in the shadow of so much gnar, Section 9 of the French Broad is often overlooked as a beginners-only run. Only 45 minutes from Asheville and with a quick shuttle, Section 9 is good at almost all levels. It is a popular run for SUP, bellyak, and all other manner of river craft, due to the year round flows, beautiful scenery, and good play. The multitude of read and run rapids don’t hurt either.

END_OF_DOCUMENT_TOKEN_TO_BE_REPLACED 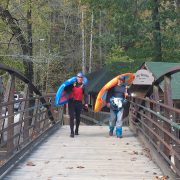 Last weekend was the National Paddlesports Conference at the Nantahala Outdoor Center in Wesser, NC. What an honor it was to be there! In 2015, ‘Prone River Paddling’ was adopted under the leadership and guidance of Robin Pope, multi-discipline instructor and mentor. What does this mean? It means Bellyaking officially became a discipline with the American Canoe Association. We also now have standardized the instructional arc of bellyak so that others can follow in our footsteps. More prone river paddling love to be shared!