The 2017 Ocoee River Race, sponsored by the Tennessee Valley Canoe Club, had over 130 racers this year.  This is a challenging downriver race, requiring  hundreds of small moves to stay in the fast water to make it down the 4+ mile Class III course. Team Bellyak represented with our own category and five racers this year.

How to Race the Ocoee

To post a fast time, it’s not so much about being fast in the rapids, as much as it is about having the smoothest line between the end of one rapid and the beginning of the next. Each rapid has multiple ways to run, with a fast ‘race line’ through every feature. Racers are released in one minute intervals to race against the clock. Adam Masters – creator of Bellyak – raced twice: first in the men’s kayak hand paddle division (racing on the bellyak Frequency), and then in the bellyak category (racing on a Play 35). Here’s what he had to say about the experience:

“Every year I’ve raced in men’s hand paddle (as that is the closest category to bellyak), and I like to pretend to hurt people’s feelings, or at least make them realize we aren’t messing around. I’m wearing webbed gloves, and they are using large plastic hand paddles. I won the category in 2012, and since then we’ve created our own category. For the past three years I’ve come in right behind the hand paddle master of the southeast, Keith Sprinkle. Plus, I just want to race bellyak in as many categories  as possible.

The Frequency is the fastest boat in the bellyak lineup, at 8’7″. The flip up skeg is designed to work in whitewater, and the Ocoee is a rocky, shallow river – a perfect place to put it to the test. The skeg allows the boat to stay on course in the squirrelly water between rapids, thus making it much more efficient to paddle quickly during the transitions.  After racing back-to-back with and without the skeg, I’m convinced of it’s effectiveness for going fast in whitewater.

My first run was clean with only a few mistakes, I spun out in the middle of Broken Nose by overshooting the race line, and then got stuck between a big raft trip in Double Suck that I didn’t get past until half a mile later at Double Trouble. The next part of the race are the doldrums – a half mile of flatwater where dreams are crushed, reasons for living are questioned, and you come face to face with the truth of how much you did or did not train for this type of output. For whitewater paddlers, flatwater is akin to uphill paddling. For the past year I have been swimming, mountain unicycling, running and paddling more regularly than any year prior, and I felt as strong as I ever have during the race.  I stayed fast all the way through to the end, and nailed the finish move at Powerhouse, which is deceptively tricky if you’re not prepared for where the finish line raft is.”

Adam finished in third place for Men’s Hand Paddle Kayak, with a time of 39:15.

The rest of Team Bellyak had start times  50 minutes after Adam (since he was the only one racing two categories). As soon as he was done with race lap number one and partially recovered from the lactic acid overdose and weird tracers he was seeing around everything, he jumped in the van and headed back to the top.

“I had strategically placed an ice cold Dr. Pepper in a glass bottle, along with some more traditional recovery foods like Skittles. Strategic soda and Skittles intake can be performance enhancing. There happened to be a car wreck on the two lane road back to the top, so I sat for nearly an hour blasting Rihanna on the half of a radio station that one gets in Copperhill, TN and cheering on the rest of Team Bellyak as they paddled by.”

There were five competitors in the bellyak category race – Adam Masters, Jamie MacLeod, Bill Wunderlich, Corey Topping and Sarah Neal. Adam and Jamie races on Play 35s, and the rest chose Play 45s. The race according to Adam:

“My second run was clean. I made no mistakes and stayed steady throughout the run. However, the absence of the skeg was very noticeable as I had to put substantially more energy to keep the boat on course. I was mildly delirious as the end of the run and grateful for all of Team Bellyak standing on the bridge above the finish line cheering for me!

For 2017, we decided to recognize ourselves and make our category as awesome as possible. Our prizemaster this year was Bill Wunderlich, who had assembled the best assortment of prizes for the Bellyak category.”

Time: 49:01 (missed takeout raft, had to paddle back upstream)

Time: 49:02 (missed takeout raft, had to paddle back upstream)

Time: 51:02 (only his sixth trip ever down the Ocoee, and he will be in the medals next year) This sums up how we feel about racing the Ocoee, and shows Bill’s awesome helmet prize. We had the most fun! Especially that guy in the back. 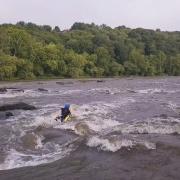 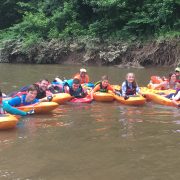 Bellyak at the National Paddlesports Conference 2017
Scroll to top