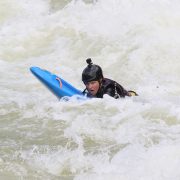 What’s the Biggest Thing You’ve Done on That? 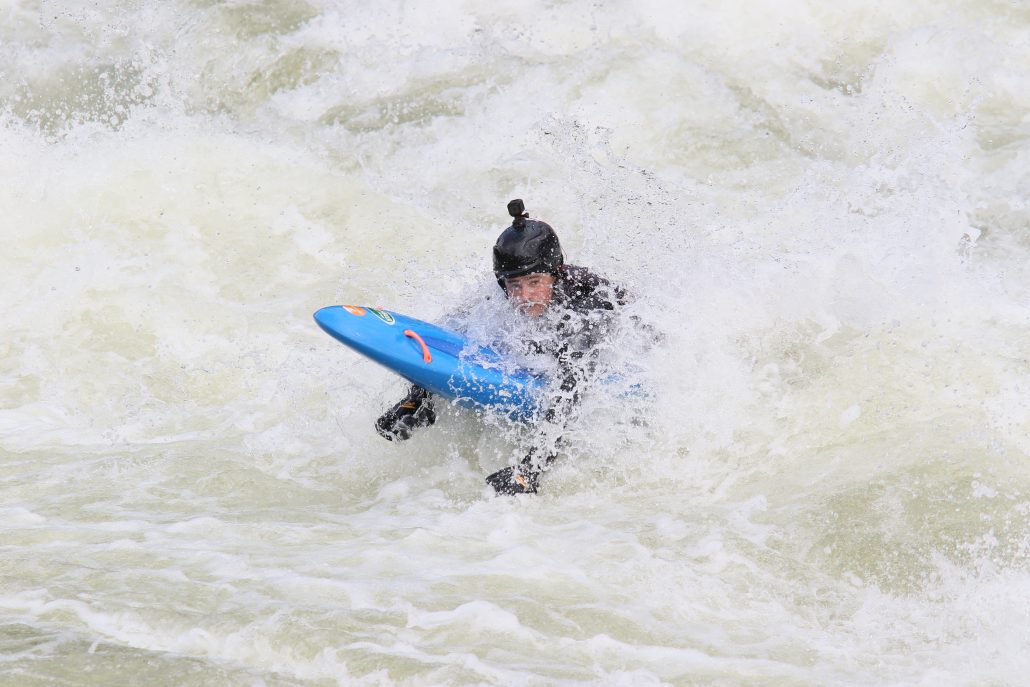 Even the Squirrels are Scared

The Upper Gauley River, in West ‘by god’ Virginia, has long been the bedrock class V run of every aspiring kayaker. It’s a big, powerful river with multiple places that can kill you dead if you get off line. More nervous shits have been taken at the put in of this iconic run than possibly any other run in the world. It’s not that technical by Southeastern standards, as the lines have a pretty wide margin of error measured in feet, not inches. But the real danger are the undercut rocks, and the long intense rapids. This run had been causing me anxiety since I first decided to run it in a bellyak in 2012, but didn’t actually run it til 2016. I had kayaked the Upper Gauley as a teenager and I remember the anticipation of paddling it was much worse than the actual run. But this was different. I was paddling a boat that I was only attached to by gravity, with nothing but my hands to propel me. I was remembering stories of my Uncle Allen clawing off his fingernails trying to get out from an undercut, tales of kids dying in siphon suck sieves and hydraulics so big squirrels were getting torn out of trees. Thinking about how bad it would be for the brand if I screwed up and lost my boat, I was putting a lot of pressure on myself.

Self Preservation vs. Cajones

Friday morning of Gauley Fest, 2016, I woke up sweaty in my minivan to a blue sky day with highs in the 70s. I hemmed. I hawed. My “high sense of self preservation” was in overdrive. I knew deep down my skill level was far greater than the size of my balls and none of my friends doubted my ability to get down the run gracefully. I just doubted myself. Eli Helbert, one of the best OC1 paddlers in the world, told me to basically get in the car and let’s go, I could follow him down the river. So I went. 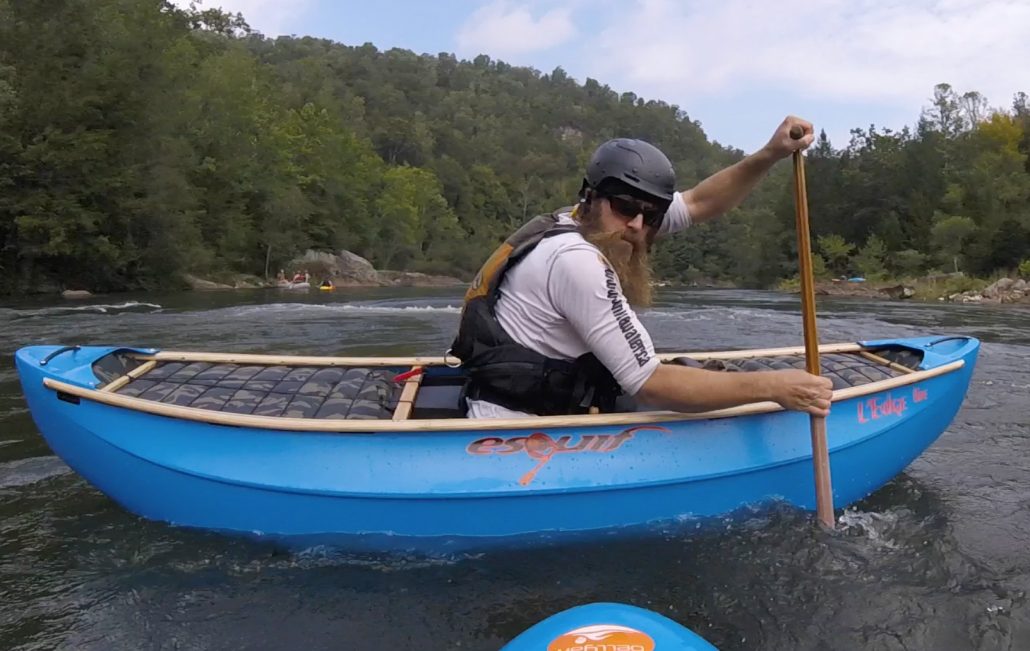 The Canoe Guru, Eli Helbert…none better to follow in the world.

The put-in was clogged with rafters, kayakers, long lines at the porta-potties, and throngs of people congregated together in various states of undress, pounding light beer and chain-smoking. If these people could make it, even in a raft, I was good to go. I found a porta-potty willing to take some abuse, put on my NRS Radiant fleece lined wetsuit (my favorite piece of gear) and got in the water, away from the crowds.

Nothing But Plastic Between Us

As soon as I get on my bellyak and pushed away from shore, my anticipation anxiety is replaced with a feeling of being completely comfortable and relaxed. Maybe it’s because I designed the bellyak and know it like the back of my hand. Or because I’ve spent thousands of hours training for this moment. Or maybe it’s because the unencumbered swimming motion of a bellyak is more natural than ‘sitting’ in a kayak. Whatever it was, I was grateful to be in the water and get downstream, with nothing between the river and me but a hollow piece of plastic. 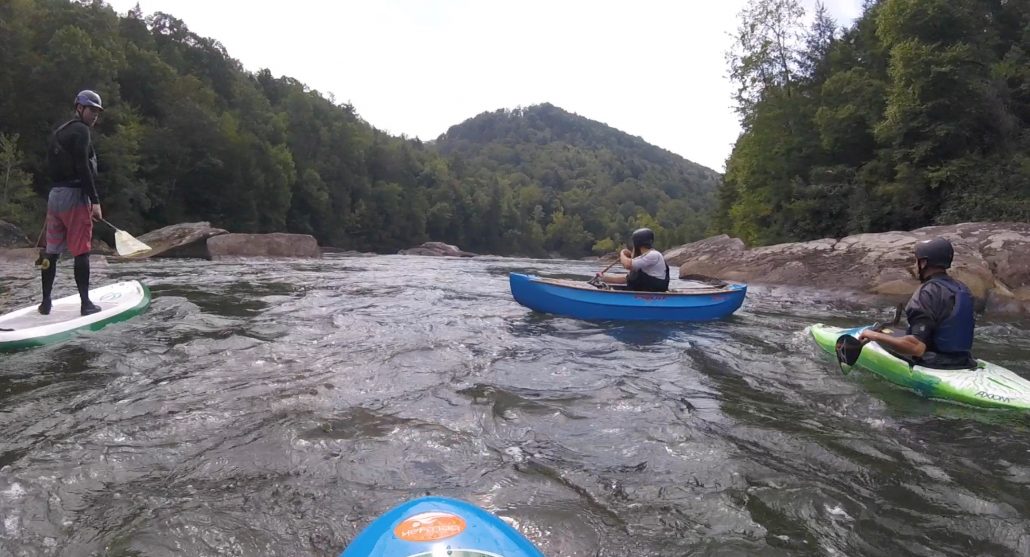 A SUP a canoe, a kayak and a bellyak set off on the Upper Gauley…

The run was awesome. After a few pucker factor moments in the first big rapid, Insignificant, I was good to go. We had an odd crew: Spencer Lacy on SUP, Eli in his Canoe, me in my bellyak, and a handful of kayakers. I ran everything except for what I didn’t. I didn’t run Iron Ring. Wasn’t feeling it. Don’t care. I always listen to my gut. I took the adventure race line on far river left instead. Someone else can get the first D on Iron Ring. You’re welcome! 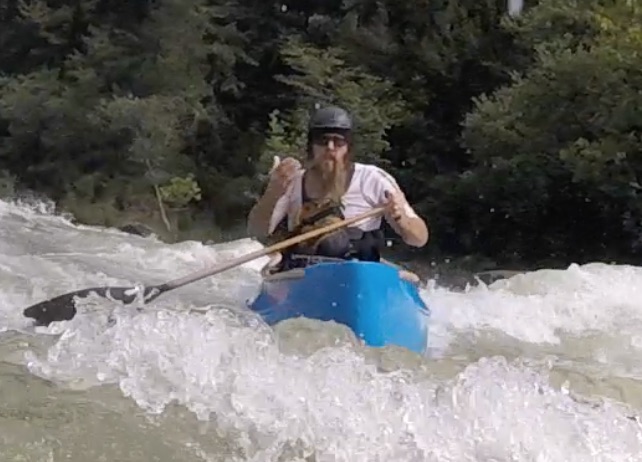 Second Half of Insignificant

Legend in My Own Mind

The feeling of getting past the big rapids on a run is like waking up the day after exams are over and knowing you passed. Equal parts relief and exhilaration. In the Guinness Book of World Records for things that tens of people care about, I was the first to prone whitewater paddle the Upper Gauley. The same day a nine year old successfully kayaked the Upper Gauley and another guy did it in a drift boat he built himself. But I was the first to do it on a boat I designed for a sport I invented. 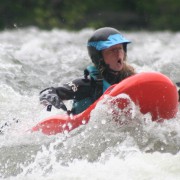 We hear that all the time…and we understand. New concepts are hard to grasp, generally resisted and often ridiculed. I know…I’ve experienced it first hand. When I first launched Bellyak in late 2012 I thought that the world would embrace my new idea for the self evident truth of it’s own awesomeness. I thought that I’d be rich by now and not driving a 10 year old minivan with over 200,000 miles. All the advice I got early on was that it takes time…give it five years…everything will cost twice as much and take three times as long. But I was fired up and passionate, and thought I could do it quicker. At that time the world was rapidly getting into SUP, and kayaking was still grabbing the headlines and the imaginations of the masses. 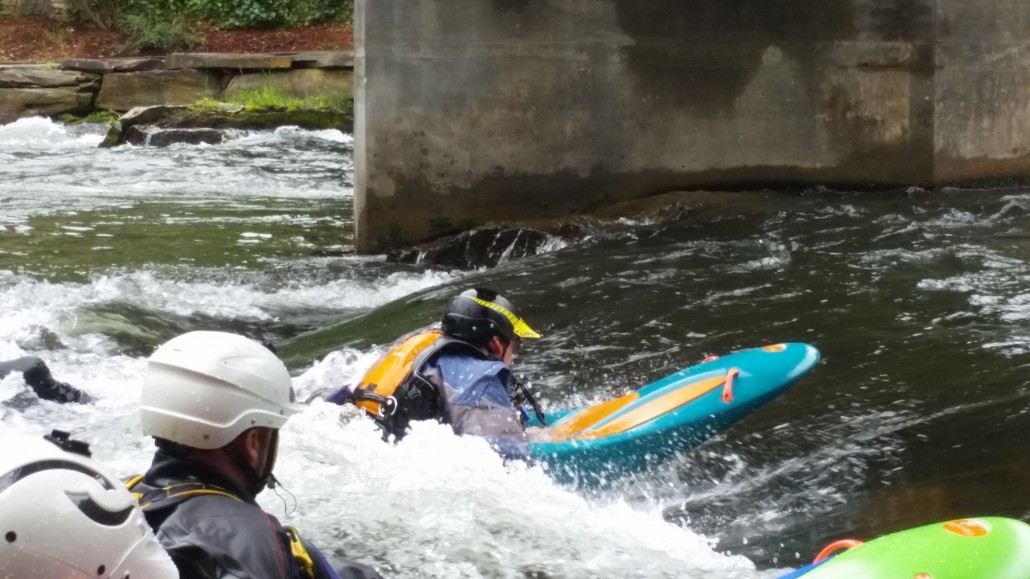 Kayaking is cool. It’s where I came from. It’s amazing what people are able to do. And, at the same time, sprayskirts are archaic, and probably the biggest reason more people don’t get into paddlesports. We didn’t set out to replace kayaking, or create something better, or do something for the sake of being different, or create something for people “who can’t kayak.” We created the Bellyak. It stands on it’s own. You can’t compare it to anything, because there is nothing like it. It’s like swimming, but enhanced. It’s like kayaking, in that you are in your own boat and can carve, surf and catch eddies. To feel the water with your hands, to see the currents at face level, to feel the currents along your entire body as opposed to your butt or just your feet…there is nothing like it in the world. 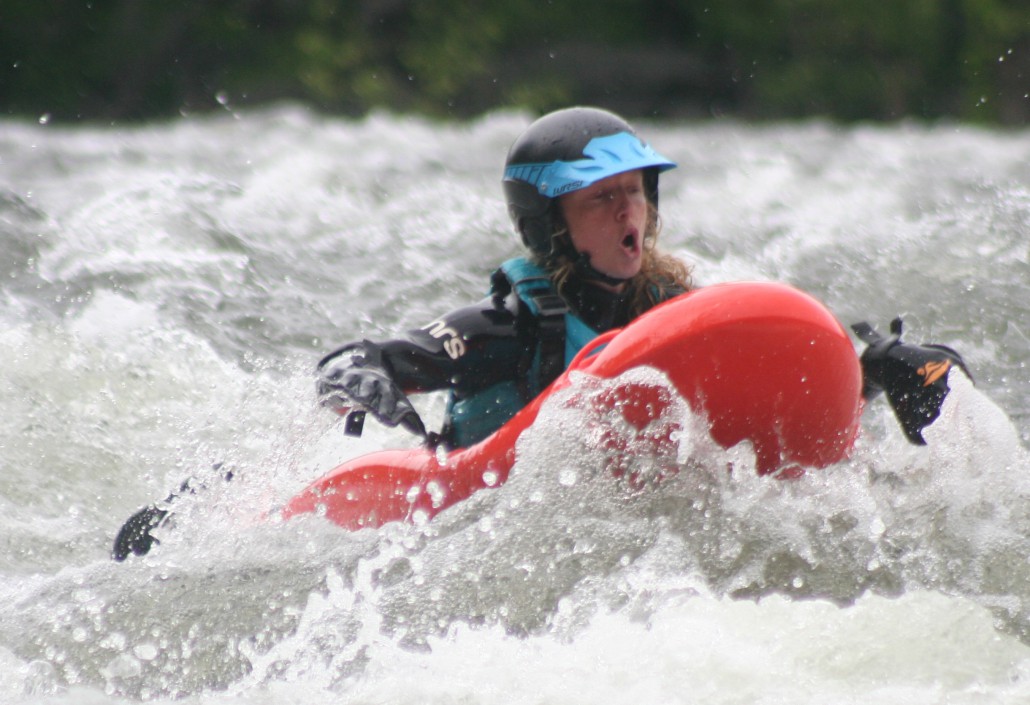 We like to think of ourselves as disruptors…disrupting the way paddlesports has always been done not for the sake of disruption, but purely in the pursuit of fun. That’s it. If it wasn’t fun, exhilarating and engaging, I would have never taken the time to refine my ideas and take the risk of putting it out there.  We’ve been around long enough, and trained enough people, to know that most everyone who tries it has a 180 degree shift in perception between what they think it is…and what it actually is. We’ve seen people with no whitewater skill crush Class III within minutes…we’ve seen Class V kayakers get worked on Class II in the Bellyak.  The learning curve is quick, but there is a curve. It comes down to humility…working with and not against the water. Will you join us? It actually IS fun:) 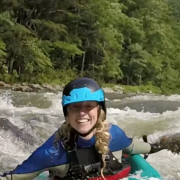 Want to learn the language of whitewater in a fun and supportive environment with some of the worlds best Bellyakers? Adam Masters and Jamie MacLeod will be teaching a Quickstart Demos, One Day Intro to Whitewater and our Bellyak Progression Clinics. 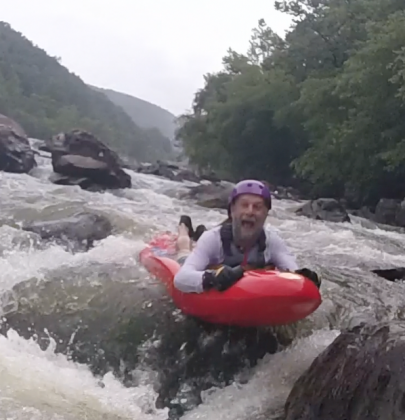 These will be held once a week in Asheville on the French Broad River…we’ll be announcing our locations via our Facebook Page each week. These are a quick and easy way to hop on a bellyak and test out our models to see which one is right for you…we’ll provide the boat and the gear and let you hop on and check it out! These are free to the public…just drop us a line and let us know you’re coming!

This class is for someone new to whitewater who wants to learn the ins and outs of moving water.

What you will learn:

These courses will be taught on the Tuckaseegee River in Dillsboro NC, dates to be announced early May. Please contact us for pricing and availability! 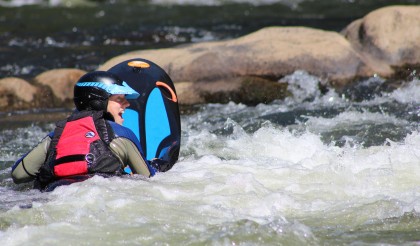 Want to do more than just try it once? Want to get better, to learn skills to take others out on the river? Then the Bellyak Progression Clinic is for you! This eight week course will take you from zero to bellyak hero….we will be using the Tuckaseegee, French Broad, Nantahala, Pigeon and Ocoee Rivers…beginning with the Intro to Whitewater skills then progressing each week in skills and fun to get you certified to be a Bellyak Instructor. You are guaranteed to have fun, and upon completion will be eligible to be a Bellyak Ambassador (more details coming very soon!) 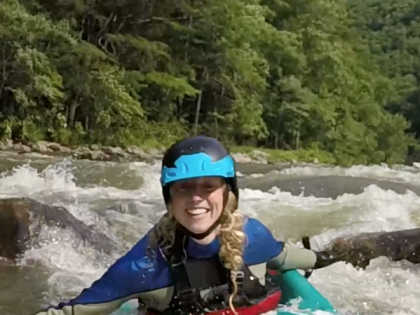 Please, contact us today to find out more. We will be releasing the full course schedule, pricing and curriculum very soon! 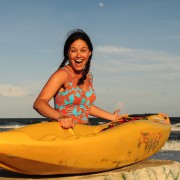 You don’t need a river or a wave to have fun on a bellyak. Like to swim and be in the water? Then the bellyak will enhance your aquatic experience by helping you become one with the water. Are you a resort owner looking to add another activity for your guests? Do you have an adventure center that is looking for something that is new, easy to do yet challenging? 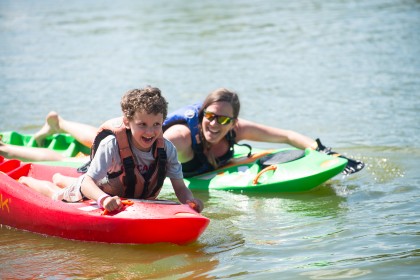 Perfect for kids of all ages, guaranteed to make you smile! 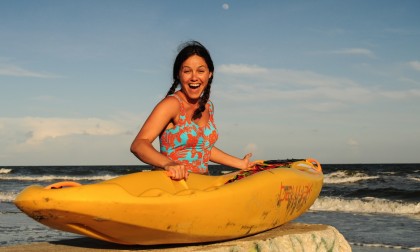 Don’t you want to be this happy? 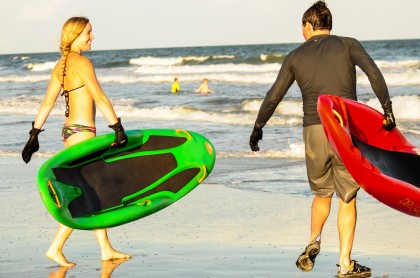 Lightweight and Portable, easy to take to wherever the water is! 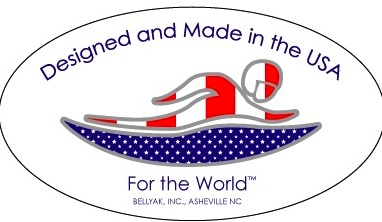 As always, Designed and Made in the USA for the World! 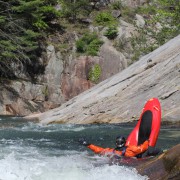 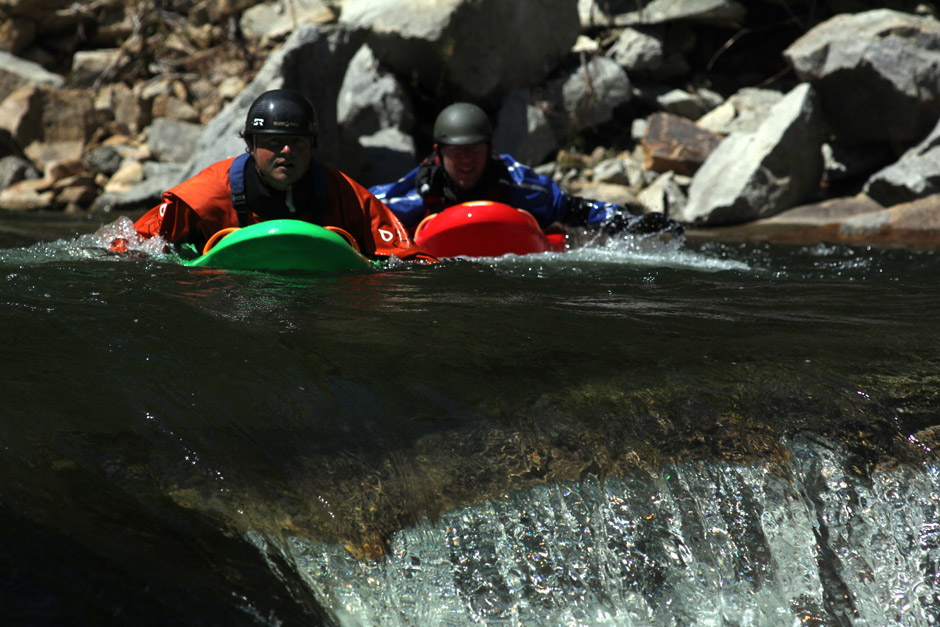 Does your face get wet? 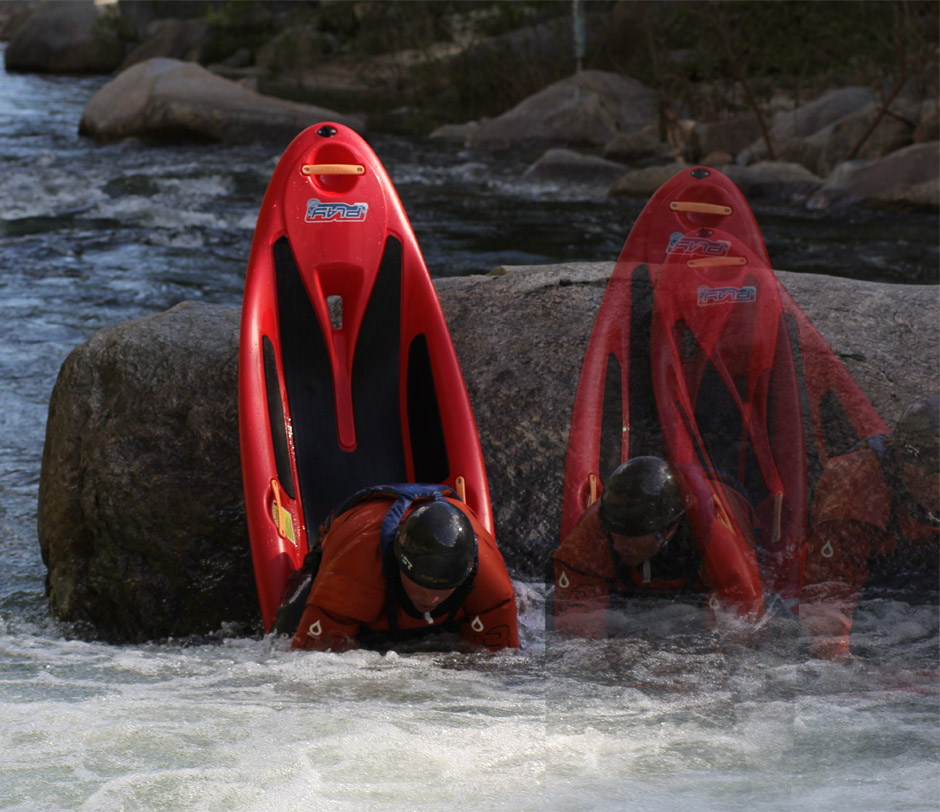 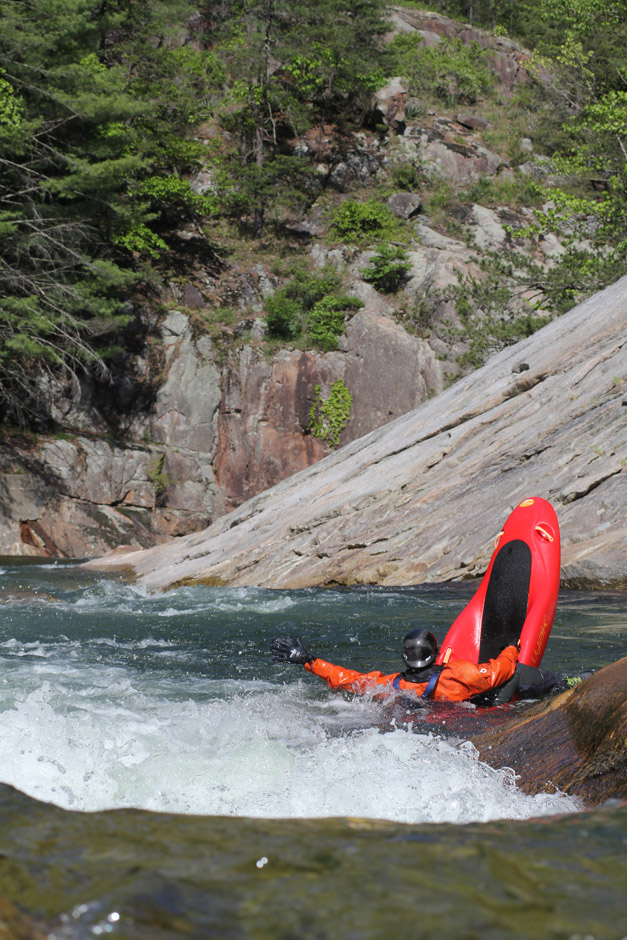 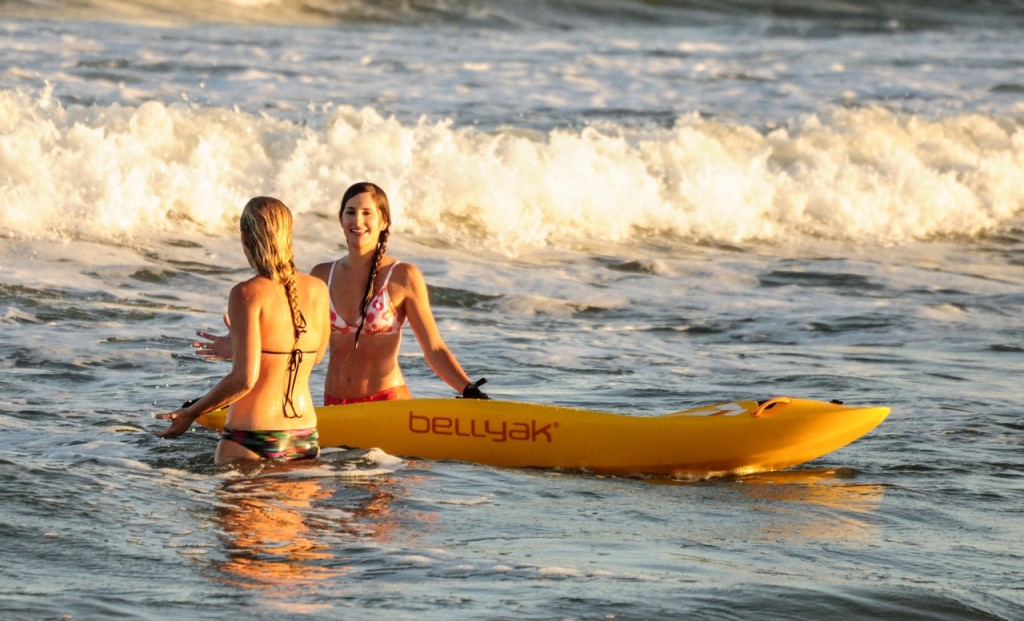 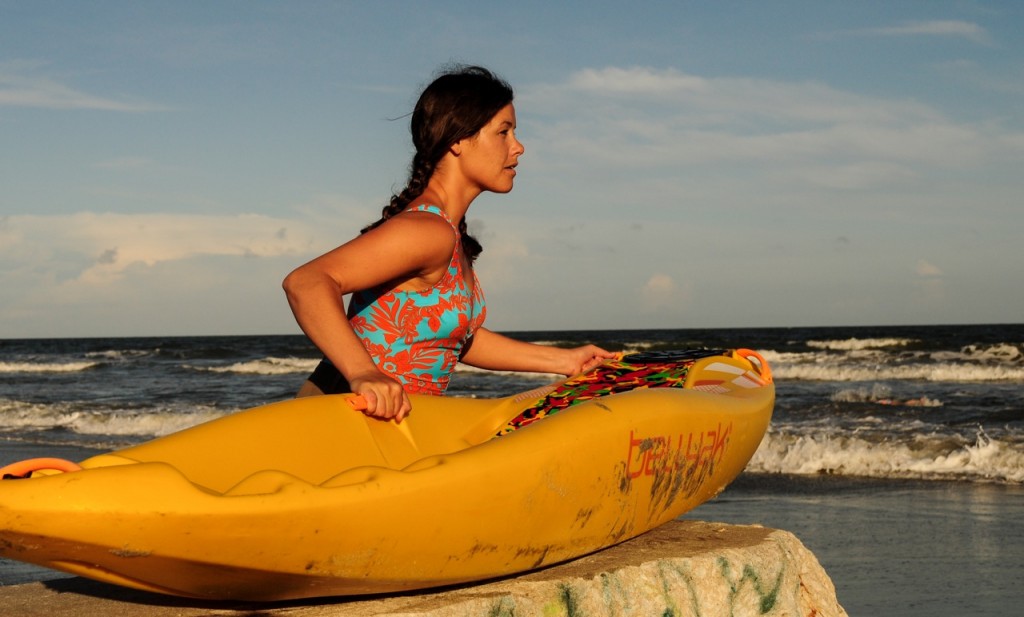 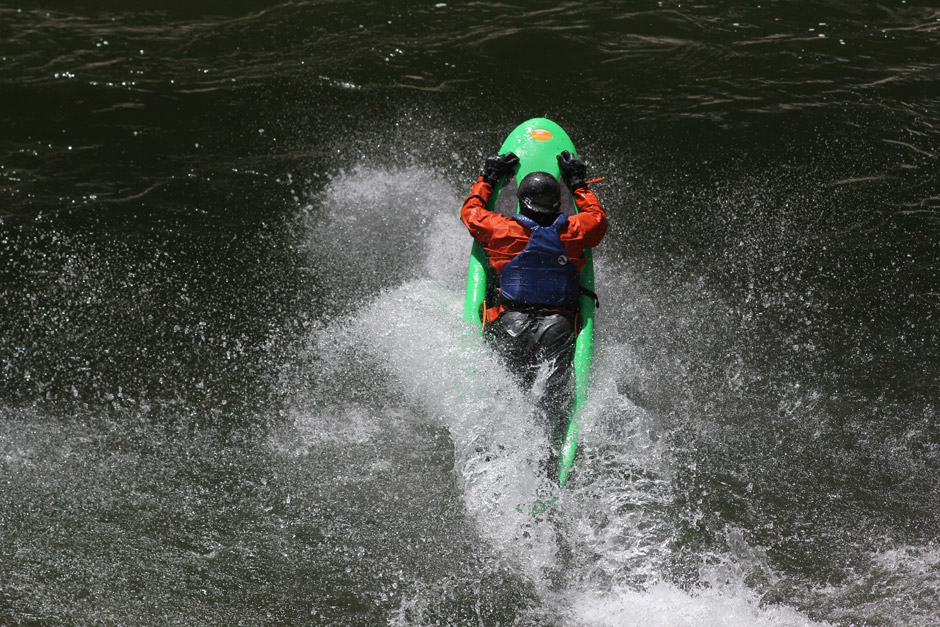 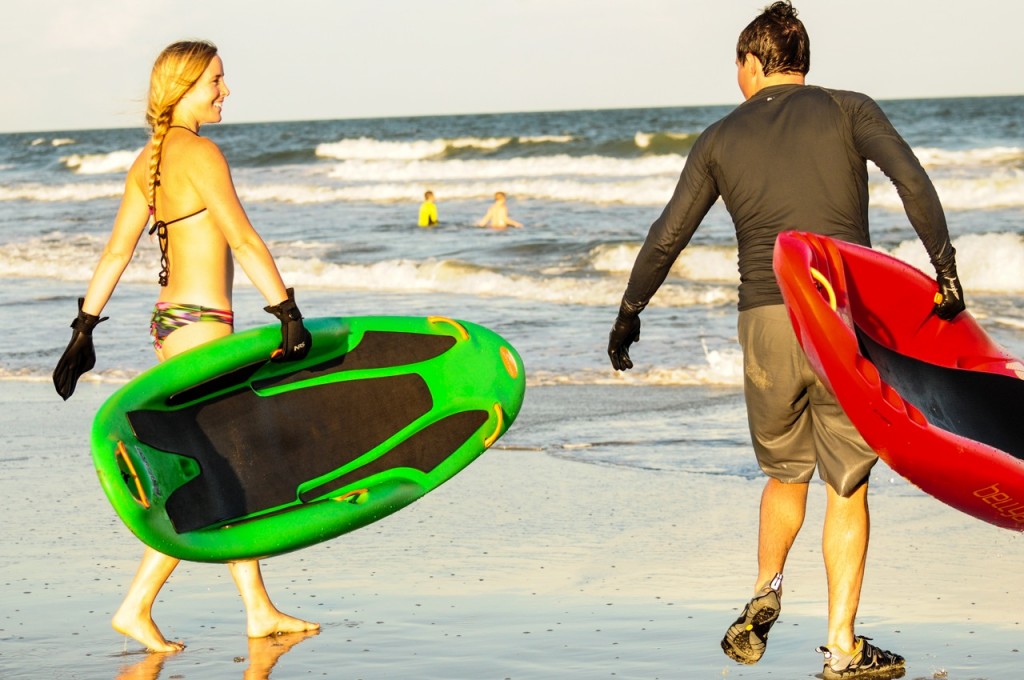 What you need to Bellyak

That is about it folks!

Depending on the water temp and time of year, you may also consider –

Because you are exposed to water more than in a regular kayak, a wetsuit offers the best combination of warmth and flexibility for being in the water, without extra resistance from extra fabric of, for example, a drysuit. In the heat of summer, shorts and/or bathing suit and a rashguard are usually enough, unless it’s really cold water (ie: the Nantahala). Be sure to sunscreen the back of your legs–that’s not a fun sunburn! Also, a lifejacket and a helmet are essentials. So far, the PFD’s by Astral work best. Many kayaking vests are made with extra thick padding in the abdomen area and/or pockets which, unfortunately, can be somewhat uncomfortable to lay on. The Astral vests“Norge” or “Abba” with Kapok foam seem to be best, as they conform well to the body while laying down. NRS Propulsion Gloves are used for speed and direction. We are also developing an area on the boat for storing a dry bag. As of now, there is a sizeable hatch in the bow. We love Watershed Dry Bags in general for toting gear. 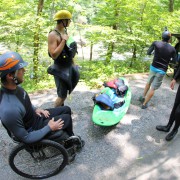 Last weekend, Adam & Anna attended the NOC Freestyle Shootout and Endless Rivers Nantahala Open. åÊAdam ran the falls in an endless loop showcasing the versatility and prowess of the Bellyak. åÊHere are some photos from the weekend. Stay tuned for more updates from the gorge.

Section 9 of the French Broad River in Marshall NC, a great run…mainly class II/III. åÊClassic rapids like S-Turn and Pillow Rock, where many people have their first unpleasant swim in a kayak. åÊSwimming it on a bodyboat is the way to run Section 9.

Barry Kennon, shaping his new stand up paddleboard design in the shaping room.